The Beauty of Nature (Diamante)

I recently turned fifty and am painfully aware that I  have graced this earth for a half century. Looking back at what exactly I have been doing for the last five decades takes up the better part of my evening tonight. Reminiscing about old times as I shuffle through my trove of photos, I wonder if I’ve made an impact on anything or anyone. Is it important? Part of me feels that I have, but there’s that little voice that whispers, “You could have done more!” I roll my eyes, take another sip of my cappuccino and continue my journey into the past.

My mother raised all of us kids, there are four, to think with our brain and take responsibility for our actions, along with a myriad of parental sayings that torpedo out of my mouth in certain situations. With her strong influence and  maternal guidance, she definitely had a hand in how I viewed things, my communication skills, job ethic and even laid out the groundwork for how I go about problem solving.  I owe a lot to my Mom and looking back, I took her for granted many times because she was there. Moms kinda take a back seat when you’re trying to spread your wings and fly.

She really had her hands full with us kids, two girls and two boys, working and raising us by herself the majority of the time, ’cause Dad was gone a lot due to him being on the road.  As I was the oldest, I was relied upon to help with cooking, cleaning, watching the siblings and still be a kid. This responsibility was the foundation to my work ethic. The only thing that wasn’t a proactive component in my budding work habit was that, I was always late. The reason I was late, was because I hated going to sleep, I hated waking up and had the hardest time getting my tired butt motivated. This habit was all mine and anyone who knew me, would agree! It took me a better part of ten years to break that habit. Now I strive to get to my destination as close to the time as possible, you know why? Because I hate waiting even more than being late. You will never find me getting to an appointment fifteen minutes early on my own accord, only to wait until the appointed time chimes on the clock. Yeah, my life does have its contradictions!

When you grow-up and start having your own family, there are a lot of crossroads and decisions that you will have to live with. Like many young Moms, I had a mother lode of  actions I was going to do and use. Of course,  I had no intention of doing anything like my mother. Being a twentysomething Mom, I was probably like many young women who decided that all the injustices that were dealt to me growing up, would not be handed to my babies.  Looking back, so many trials and tribulations could have been diverted if there was a magical button that could be used when emotional things got out of hand.  To say my twenties were a bit chaotic, would be an understatement.  A lot of it had to do with being stubborn, learning  to live with another human being and just being an adult . . . it was a rough ride to say the least. Don’t get me wrong, I wouldn’t trade any of it because it made me who I am today, it just wouldn’t be a repeat if I had three wishes:)

Growing up seems like a long time ago. My kids are grown and have families of their own. I live with the same man who survived our ever-changing relationship and life is so much more calmer. I still wait until the last minute to get to my destination, I continue to learn new things and challenge myself to go after my dreams. When my kids call to ask for a recipe, or advice I always smile and see them in my mind’s eye as little kids. Looking back, I believe that I have had a positive impact on many things and many people because of who I chose to be. With that being said, I also understand and take responsibility for having a negative impact on some people and things as well. Does that make me a bad person? No, it makes me a realistic person who learns from life’s experiences. I’m a strong woman, with a mind of her own and who takes responsibility for her actions.  For that I have to thank my Mother, because she has always been a constant influence in my life and even though I don’t call often, she know’s I love her because she’s my Mom:)

With NASA’s space fleet of Earth-observing satellites constantly circle our globe, they’ve put together a rather gorgeous video documenting what our planet looked like throughout 2012, this includes some stunning true colour satellite imagery, Earth science data visualizations, time lapses from the International Space Station, and computer models, plus loads more from their bevy of different tech and instruments NASA has at its disposal in our orbit.

The video is part Earth Month 2013, which coincides with Earth Day on April 22nd of this year, you can always mosey on over to NASA’s Earth Month website for lots more video’s and information, sadly the video isn’t narrated, this would have been such a gem for the late great Carl Sagan to voice over…but still, it has some quite hypnotic beats.

Poetry site’s to get inspired by:)

In honor of National Poetry Month, here are three poetry websites I subscribe to and why:

Where do you get your inspiration?

Beautiful day to visit, plenty of sunshine, crisp clean air and inspiring scenery. While we were there, somebody was walking on the lake. Although it’s still frozen, I wouldn’t want to walk on it because it’s starting to creak when you put weight on it! 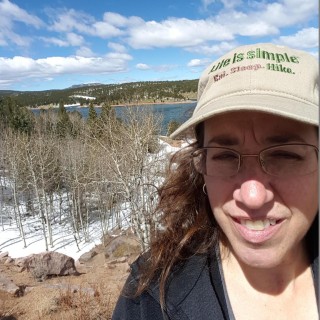